“We ere told to stare at one point. I lokked straight at Guruji.
Behind him was the mandir gate. Suddenly all around him I saw a circle 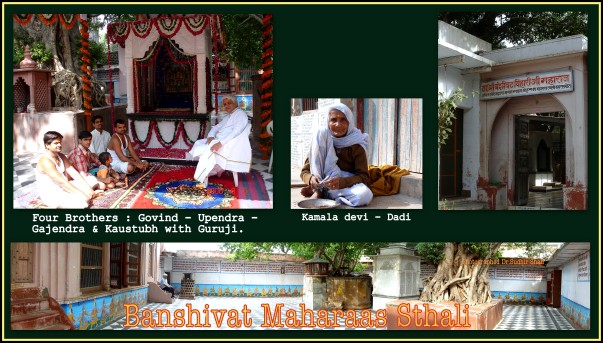 moving. Different colours were there. It looked as if guruji was covered
by a meghdhanush (raibnow). It seemed as though all these colours
of the rainbow were coming out from him. I could see his face very
slightly; the rest of his aakruti ( outline of the body ) was covered
in these colors”. ” I got the feeling that all the power was within guruji
and was coming out through him. Then the child began to cry and
my dhyan ( concentration ) broke “.

” Guruji had instructed us to be concentrating on any one spot.
I focused behind guruji at the mandir door. Aftersomtime, the
whole area became dhundla ( foggy) like kohara (mist) spread
everywhere. Guruji’s and your aakriti (forms) became enveloped
in this fog. Both of you disappeared, and only the forms were visible.
It was a very vishesh anubhuti (special experiance ). I have never
seen anything like before. It felt like some very light roshni – tej
(bright powerful light ) was there behind the whole fog, which
looked like a cloud. Sab kuch usmen sama gaya.
(Everything merged into this fog).
Then the child began to cry and guruji told us to become normal”.

Guruji told us to focus on one spot. I stared at the name of Radhe on the
main door, behind guruji. I saw a circle form around the whole Radhe
name. This circle expanded, and there was something like surya kiran
(sun rays), not as bright; come out of the circle, out of the name.
Charan aur se tej nikal raha tha (there was some powerful light
coming out from all over). The name Radhe disappeared and nothing else was visible.
I had this anubhuti (experiance) of some presence there,
also in the Radhe name. I have never experiance anything like before,
my faith increased in the Presence of Thakurjee in this mandir “. “Then the child began
to cry and we came back to normal.”

“Guruji had instructed us to be looking at one spot anywhere.
I concentrated on one round spot on the gate design.
(This gate has written in hindi all over) राधा राधा राधा .
Suddenly after 15-20 minutes the gate began to shine.
I kept on staring at the shinning circle, which grew larger.
Soon the door disappeared and only the circle of light was visible.
It began to shine and in spite of no light I could see a strange chamak (shine)
on the spot which grew larger and became brighter.
There was constant prakash (bright light) on the area.
Soon I could not see anything else – the prakash grew
larger and everything else disappeared”.